The latest news on development work for 12d Model software and macros. 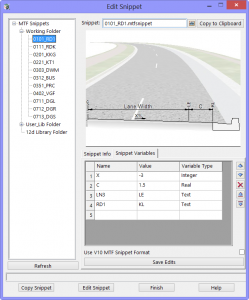 Snippets were introduced in 12d Model 10 as a way to package up a group of template modifiers, and use them again and again.  A lot of designers took them further than the 12d programmers ever expected, so they have had a rewrite for 12d Model 11 — they’ve really been put on steriods!

Snippets will be a big part of civil design in 12d Model 11 and onwards.  EXDS has been working on a standard library of snippets that will ship with 12d Model, and a tool to view and edit the snippets, and to add them to your design.

The screenshots above and right show a busbay snippet, and the snippet library that allow you to preview and choose the snippet to use, and and example of a complex design created solely with snippets from the library.

Joel, Sam, and Austyn at EXDS have been working hard adding tools and documentation to the EXDS Plugins:

For Designers
Chain creators — Create a chain from a list of Functions, Super Alignments, or Plot Parameter Files.

For Drafting
Dynamic Parallel — a parallel option that works like just your favourite CAD program.

For Surveyors
Chainage / Offset Measure — measure chainage/offset/delta ht/ slope/ between a control string and a point ,and choose what gets written to the file.

Extend to Boundary — will extend a string to a boundary (where it intersects another string), giving you a choice of four options for the z value at end of the string – unchanged | interpolated on grade | height of boundary | typed input.

The launch of 12d Model 11 is getting close, and 12d Solutions has opened up Beta testing to a growing group of people.  Being part of the Beta test team means you get a chance to try out out the new tools early, and have an opportunity to set up workflow and standards for the new version.  Access to the Beta forum means you get to discuss ideas with other Beta testers.